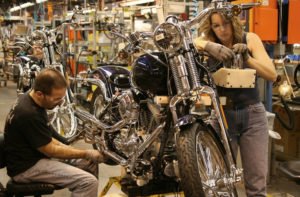 Attorney Anthony Sherr successfully represented a Michigan-based manufacturer of a lift being used at the Harley Davidson Manufacturing Plant in York, Pennsylvania.

More about the Case

CASE SUMMARY:  A manufacturing company in Michigan, specializing in hydraulic lift tables, was sued in the Philadelphia Court of Common Pleas as a result of an accident which occurred at the Harley Davidson manufacturing plant in York, Pennsylvania.  The worker suffered severe injuries when a co-worker operated the lift table in close proximity to a rack with heavy chains, which were to be installed on the motorcycles.  The rack of chains fell on the worker’s legs causing catastrophic injures.

SHERR LAW GROUP APPROACH:  We removed the case to federal court to take advantage of the more definitive ruling applying the Third Restatement of Torts formulation of products liability.  The case was vigorously defended, and summary judgment was granted for Knight.  While the matter was on appeal to the Third Circuit Court of Appeals, the Pennsylvania Supreme Court decided Tincher, which sought to set Pennsylvania Products Liability law in a new direction.  The matter was remanded to the District Court.  The case continued to be vigorously defended upon remand.  Additional discovery was conducted and DeJesus’s team came up with a new expert as well as a new theory of liability.

RESULT:  While Daubert motions were pending, and the parties were gearing up for trial which was scheduled for the second week of August, a settlement conference was ordered by the Court.  As this was the fifth settlement conference/mediation to take place in the matter, we were not optimistic about the matter settling.  Our resources were dedicated to gearing up for the trial.  However, plaintiffs signaled that they were prepared to settle the case at a greatly reduced amount.  Eventually the case settled for a fraction of plaintiff’s previous demands.  We will have to wait until the next case to greatly influence the course that Products Liability take in Pennsylvania.